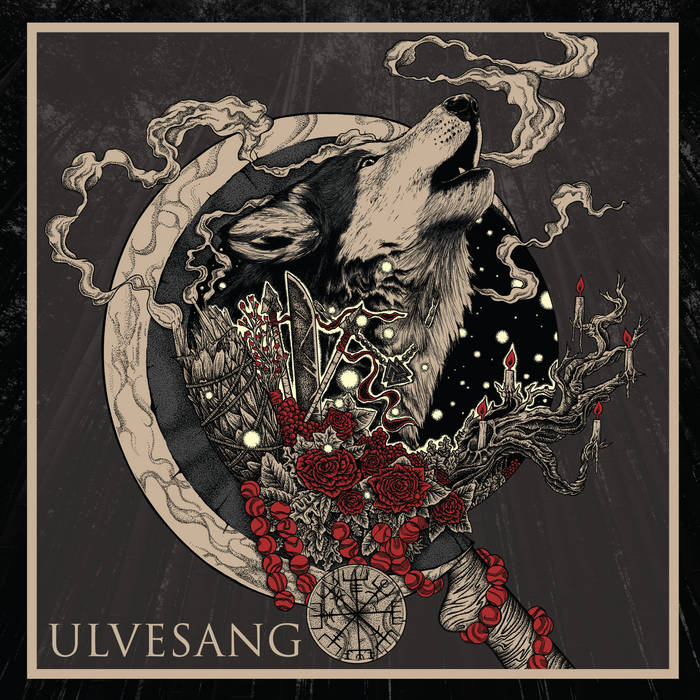 — BLACK METAL & BREWS —
"With their self-titled debut, Ulvesang channel the beauty of Canadian winter through acoustic passages that call to mind haunting dark folk and neoclassical atmospheres. Distant, chanted (if not hummed at times) vocals serve as an additional instrument rather than a dominant line with lyrical influence, essentially layering the cold, crisp environment that the rest of the music conjures. A heavy helping of reverb on most of the instruments allow for this to feel like a massive emptiness without cluttering up the relatively sparse and subtly arranged songs. I often find myself imagining hours have passed while listening to songs like “Taakeferd” and “Litherpoan,” as their melodies and structures are crafted in a fashion that takes the listener away from all present experiences. Ulvesang is primarily a softly played, gentle experience, but it only makes the few bursts of greater energy more invigorating when they appear. This is the perfect soundtrack for getting lost outside on a cold winter’s eve, exploring in the twilight."

— HEATHEN HARVEST —
"It is said that the chirping of crickets signals the onset of fall and the slow death of summer. Thus, it’s entirely appropriate that Ulvesang‘s eponymous debut opens with said insect sounds, as autumnal tones dominate this set of evocative instrumentals throughout. While never dazzling with showy technique or unnecessary complexity—an over-tolerated distraction in guitar-based music, in my opinion—this Canadian three-piece skilfully evoke wildwood shades and images aplenty with their studied simplicity, using the space between the tones to give the mind room to wander. As a soundtrack to the ‘paganism and mythology’ that the band identify as their influences, it does the trick ably. A walk in the woods it may be, but there’s more to this collection than aimless trudging.
Focused, dreamy strumming leads you through most of Ulvesang’s leaf-quilted forest and chiming; unfolding folk melodies are a feature of most tracks, such as the melancholic “Two Rivers.” Here, as elsewhere, low chants and vocal drones accompany the guitar on and help create that dour yet reverent atmosphere while giving others a ceremonial tone. These moments are best, but it’s here that I wish Ulvesang had gone further: while the guitar benefits from a soft and crystalline sound, the scarce nature of the vocals robs some passages of their potential drama. Airy wisps of welcome voice adorn some tracks in the manner of new-age music, and enjoyably so, but some of the more high-tempo moments could have their impact amplified by a clearer, more robust vocal presence.
That said, there are very few other improvements one could wish for without compromising the essential core of these carefully tuned miniatures. The intention was never to stun the listener with epic scale, as some pagan or myth-referencing music feels it must, but to reflect the peace and introspection these influences inspire. I enjoyed the effect that the opening cricket sounds had, and I can’t help but feel that this type of light-touch field recordings could enhance other parts of the album to introduce some realism and grit, although perhaps the too-literal nature of such concrete sounds could jar with that spaciousness of thought the tunes allow. Nonetheless, my brain imagined the warmth of fires, rustling of leaves, and crackle of burning twigs on more than a few tracks.
Not everything is so sleepy-eyed and placid, however. While clearly metal-influenced—indeed, one can hear as much of the legendary early Scandinavia in Ulvesang’s music as Cascadia (i.e., Lord Belial‘s ‘Forlorn in Silence’, In Flames‘ ‘Acoustic Medley’, and Ulver‘s ‘Naturmystikk’)—the compositions pace solemnly rather than stride triumphantly. This lends proceedings an air of isolation and grace, so when a dramatic (usually rhythmic) moment does rear its head—as on opener ‘The Purge’—the sense is one of personal awe or revelation rather than thunderous shock. Not merely relaxing or unchallenging, nor attention-grabbing or insistent, Ulvesang’s first release confidently achieves exactly what it sets out to, and it does so with elegance and poise."

— SPUTNIK MUSIC —
5 / 5 "Classic"
"Ulvesang classify themselves as a blend of acoustic, ambient, atmospheric, black, neofolk, neoclassical, and even metal. They are a three piece instrumental acoustic guitar group who are inspired by spiritualism, paganism, nature, and melancholy. Multiple layers of acoustic guitars build a dynamic whole, with subtle drones and chants adding to the already immense atmosphere. Ulvesang has created a chilling debut album.
The music is thoroughly alive. Parts don't simply float in and out of nothingness. Rich, interwoven guitar lines flow smoothly from one satisfying section to the next, and not without harmonic surprises along the way. Repetition and simple overall chord structure is, of course, still an essential tool here; but subtle nuances, superb note choice, and consistently endearing motifs enthrall the listener as these repetitions gradually unfold. Often, right when a section looks to have been played out, another begins that is even more satisfying than anything in the song beforehand. Imperfections of fret noise, string slides, and buzzing are often emphasized while still feeling impromptu. It's the combination of raw performance and refined composition that make this album feel real and satisfying. Harmonically, sorrow and joy are equally balanced, encapsulating the beauty of life as well as its hardship.
One of the most impressive features here is the consistent quality throughout all eight tracks and their ability to create a cohesive album. The Purge and Arms in Pledge to Ellis begin and end the album respectively, and both songs pack an extra punch of large strummed chords and raised vocal dynamics. Taakeferd allows one to bask in little more than acoustic guitars, while Two Rivers adds a deep drone to the proceedings. Furthermore, the next track, Wolf's Passage has moving chant lines. The first portion of the record is brighter. Starting with A Town of Ash, relatively more focus is given to the deep, earthy tones. The utter loveliness of numerous sections, effective atmospherics, and interplay of the guitars make this work shine. The songs each have uniquely emotive moments that are extremely effective and yet unique to that track. Ulvesang has created an album that is simply pleasing and also rich enough for numerous listens."

— THE METAL OBSERVER —
9 / 10
"Neofolk and dark folk reside in this little pocket world; this little area that manages to somehow exists within and without the modern metal scene. Perhaps the dark and emotive nature of the style speaks to fans of metal, but it’s still intriguing that neofolk is so popular among fans of loud and abrasive music. In a day and age when bands are trying to play faster and more technical, sometimes simplicity and serenity can go a long way. While band’s like Tenhi, Nest and Nebelung have wandered similar paths of naturalistic melancholy, Canada’s Ulvesang have proven the likely heirs to the deciduous throne with their eponymously titled debut album.
Performing as a trio, featuring Alex Boyd, Ana Dujakovic and Laura Marr, Ulvesang’s music focuses on twining patterns of acoustic notes and vibrant strumming, all played through enchanting melodies. Ulvesang features eight tracks and forty-three minutes of introspective and melancholic acoustic neofolk. The band claims to be influenced by nature, melancholy, introversion and paganism, among other things, and those aspects are intrinsically woven into their sound, be it atavistic melodies or somber progressions.
While Ulvesang does share stylistic similarities to their contemporaries, something the band admits up front, they have quickly crafted their own niche in the genre. It’s most likely the band’s use of occasional upbeat rhythms and pristine recording quality that allows their sound to shine so brightly, as tracks like “Litherpoan” showcase a mixture of melancholic passages and hopeful surges of uptempo strumming. Ulvesang also offers a tremendous attention to detail, like the sporadic somber chanted vocals throughout, the muted insect sounds and wildlife during “The Purge” or the subtle string backing of “A Town of Ash”; there’s not a moment on the album that hasn’t been carefully crafted and placed with the utmost care.
Ulvesang set out to create an album that paid tribute to their influences while still crafting a sound of their own; and they’ve already succeeded with their first album. Ulvesang is serene, introspective and melancholic; the perfect companion to wander these late autumn landscapes. Fans of dark folk and neofolk should find Ulvesang more than fits the bill when looking for that dose of acoustic grandeur."