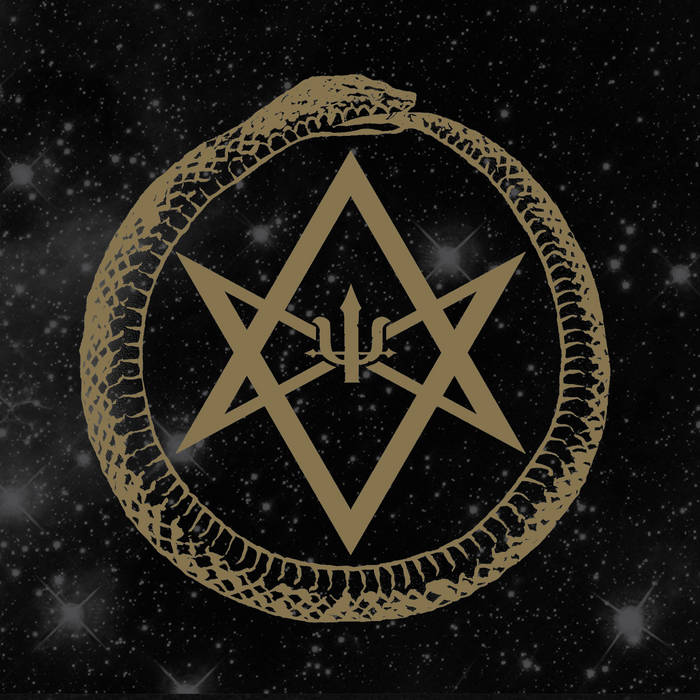 As Ryan (guitars / vocals / noise) puts it: "Ouroboros is a compilation of songs that were originally released only on analog formats throughout the career of Unearthly Trance, as well as a few unreleased songs. There are a couple of recordings on this release that were done in proper studios but most were done with primitive recording gear or in less than ideal environments. The driving force for these non-album tracks was the D.I.Y. spirit which was always a major part of the Unearthly Trance ethos. Ouroboros serves as a perfect digital documentation of exactly that idea.
Some of the mixes (the ones we still had) were adjusted and tweaked in 2014 by Jay Newman and then mastered by Ryan Lipynsky. The recordings are presented exactly as they were on their original vinyl release and others were slightly equalized to best present a continuous listening experience. Although the intent was made to make it flow, there are obviously some huge contrasts in sound and that is, of course, the characteristic of a compilation encompassing a 12 year career of one-off recordings.
From the first track on disc 1 you can hear Unearthly Trance at our most developed and mature to the sonic embryo of the earliest tracks at the end of disc 2. Not every single non-album song is featured on this double CD but if there's a particular song that you are wondering why it is not on this release, it is probably because it was at one point on CD. This release has been created and compiled because of all the supporters who have asked over the years for these songs digitally. Most importantly we would like to thank UG / Throne for making this idea actually come to fruition! Unearthly Trance may currently be dormant but our spirit and presence will never be extinguished..."

"This release is a retrospective and present compilation all of Unearthly Trance‘s unreleased seven inch splits and ten inch vinyl EP’s since their first release on Southern Lord in 2001, beginning with the most current and working it’s way back.

It is so good to hear the progression of their sound. They have always had those monster elongated builds they gained a reputation for. However here you hear the continued development towards a more advanced state in their sound forged by time. Ouroboros was put together very well and holds a continuous stream considering the changes in their sound since they began. The title Ouroboros symbolizes rebirth, a constant cycle of life feeding itself. I think it is an apt metaphor for the album, as you can see this throughout the music and lyrics.

At times it’s pandemonium, however always reconstructing itself back to that dark atmospheric flow. Here is the ecstatic appreciation of despair and misanthropy. There are at times components throughout of whispering echos, Kayako Saeki-type croaking and guttural hostile sounds faded in from behind the foreground of dysphoria.

Lyrically, it is the state of despair of industry and nature elementals encroaching. An almost misanthropic theology.

The Globalist tighten their chokehold
Misanthropic visuals
Produces a prayer to mother earth
Maximum genocide approaches
No choice in the matter to take the dive
It’s all coming down
Prepare for the worst
Oceans Downfall.

Their music builds much like the darkness of nature, where it has an eerie calm before a storm. ‘Oceans Downfall‘ is intense, with continuous changes throughout. Moving in a constant snarling direction, it projects, screeches and evolves. All with that consent sense of foreboding. ‘Blind Driving Through The Ghost Mountains‘ goes shifting through a tense atmosphere of decline and decay. Searching and shouting for salvation throughout. There is a ringing of disquiet colliding with screeching guitars sounding like birds getting caught on a wire and cawing for help, followed by what sounds like ancient verse or prayer. This the ongoing cycle of life through a backdrop of a wall of noise. There is no formulaic construct to this music, there is always something different every time.

I love the cover versions on the second disc. Their version of Roky Erickson’s ‘Night Of The Vampire’ is transformed into an even more dark and dense affair. There are also great renditions of Born Against’s ‘The Nail That Sticks Up Gets Hammered Down’ and Black Flag’s ‘In My Head’. Followed by an eerie calmness for their version of Charles Manson’s ‘People Say I’m No Good’. Charles Manson, of course, also touched on the similar ecological thought of the mismanagement of the world’s resources as well as fire and brimstone.

Unearthly Trance have such a depth and heaviness to their sound that maybe only bands like Neurosis have previously achieved. So many other bands try, but here it comes very naturally, with constant growth and dynamics within their music."